Remember back in December when I posted this story about an OSU researcher who left a little data treasure inside a rock cairn?

Along with that post I included a photo taken in November 2013 of a small rock cairn near the edge of the ice at one of my study ponds.  Here’s that photo again, alongside another that I just took in October. 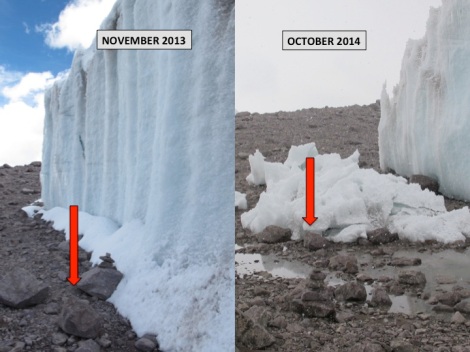 Since a piece of ice fell off the glacier directly onto the cairn, I put a red arrow in both photos marking a rock that was located just in front of the cairn. Distance from cairn to glacier last November: about 50 cm. Distance from cairn to glacier about two weeks ago: about 450 cm. So, in less than a year, that giant wall of ice lost 4 meters (that’s 13 feet, and not to mention a lot off the top, too).

Rapid warming is causing very rapid glacial and environmental changes, and nowhere is that more obvious than in the high mountains. I never expected to actually see these changes in such a short time, but it’s happening right in front of my eyes!

One response to “Measure the Distance to this Glacier UPDATE”